The “Innovative Biodiesel Project” has begun!

Welcome, I am Safari Surf’s Sustainability Director, Carl Kish, and together with biodiesel expert, Ryan King, we will be posting updates on our progress every week during the 4 weeks that we are here in beautiful Nosara, Costa Rica. Follow our progress as we create the world’s first small-scale biodiesel production system that is closed-loop (zero waste), energy independent (off-grid), and carbon negative. Our project was successfully funded on Feb 6th on the crowdfunding website, Indiegogo – view our campaign page for more information: http://www.indiegogo.com/nosara-biodiesel.
We are eternally grateful to the following people (and to those who wish to remain anonymous) who made this possible:

Ryan and I landed in San Jose Tuesday morning, and our driver Miguel was there to shuttle us 250 km back to Nosara.


We stopped at a few places in Nicoya to pick up materials and get prices for the larger pieces of our system so we could budget our funds accordingly. Six hours later, we arrived at the Hotel Casa Tucan in Playa Guiones at four in the afternoon, hungry and jetlagged.

Exhausted from all the travelling, we dropped off our bags, and then went to relax on the beach. We walked to the north end of Guiones to see the defunct palace that has been empty for years… still a cool place with a nice view: That night we calculated our expenses and laid out the entire project budget for the next four weeks… then we passed out.
Next day (Wednesday), Ryan woke up with some sort of bug and he still hasn’t shaken it off (its now Sunday). He’s been a trooper though – still working all day with a few breaks here and there, but hopefully he fully recovers before we begin construction tomorrow.
We placed an order for methanol and lye with Arvi Chemicals in Cartago, which was more difficult than I had expected because we needed to find our own transportation to bring it to Nosara (driving with flammable chemicals… most of our contacts weren’t willing), but we eventually found someone and they will be here Wednesday. Now some of you may be thinking “Wait, I thought you guys were using homemade ethanol instead of methanol?!” Well unfortunately, we have to use some methanol for the first batch of biodiesel because it is the control variable against which we test all other variables. This includes testing the purity of our homemade ethanol. Therefore, if we encounter any problems as we add our unique aspects to the traditional Appleseed Biodiesel System, we will be able to identify which variable caused the issue and fix it. Once all the testing is done, we will use our homemade ethanol for biodiesel production instead of methanol.
We are collecting fruit scraps from the Casa Tucan kitchen as well as a local restaurant/hotel, Kaya Sol, who have been generous enough to provide us with their fruit scraps daily! The sugar from the fruit, mixed with yeast and water, will produce ethanol in 2 to 3 weeks. We have a small test batch of ethanol in a 5 gallon bucket while Ryan and I are here, but we are collecting fruit scraps to fill our 120 gallon tank so that by the time we leave, we can begin the fermentation process on a larger scale.  It is ideal to produce as much ethanol as possible because by the time we collect enough waste oil to make a batch of biodiesel, the ethanol fermentation tank will be full and will last for several batches (giving us enough time to fill the 120 gallon drum with fruit again). Just to give you an idea – the amount of ethanol used in each batch of biodiesel averages to about 30% of the volume of waste oil. 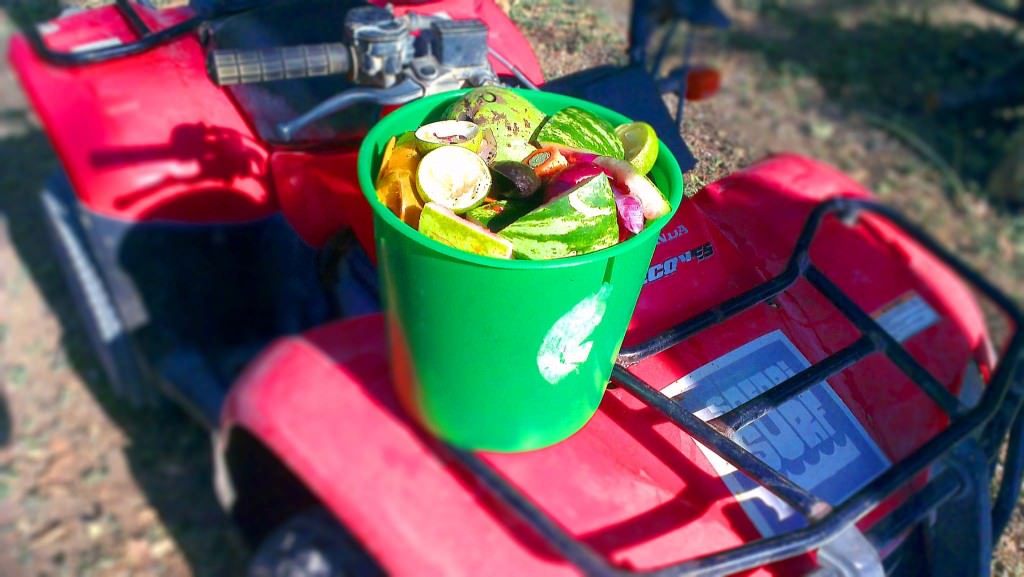 Ryan and I went to the landfill on Thursday to see if we could repurpose any of the trash, luckily we were able to find one plastic jug that was still clean and wasn’t cracked. This will be our methoxide tank (methanol and potassium hydroxide), which we mix with the grease to make biodiesel. We also were very lucky to find an old 50 gallon water heater behind the Hotel Casa Tucan, which is in working order (we just need to clean it up a bit). That will save us about $500! I really wanted to see the new Recycling Center the town is building, which is part of the landfill. I have been following their progress on this blog: http://www.nosara.hollerarchitecture.com/ and I was stoked to see in person how large it is and how far they have come – its truly impressive: Now, there has been a sudden development, and the Hotel Casa Tucan has been purchased. While unfortunate, this does not affect our program, it actually enhances it because we are designing the system to be portable – all the parts can be disassembled and reassembled at their new location. Just because the location changed, does not mean our goal is any different – we are still creating a sustainable method for small-scale fuel production and sharing the designs online for free. This was just a minor setback and Safari Surf School will be moving out of the Hotel Casa Tucan this September when their lease is up. As a result, Tyler Marsh (co-owner of Safari Surf), has been so kind as to let us build the system on his property temporarily, until we are ready to transfer the system to Safari Surf’s new headquarters (yet to be determined). We surveyed Tyler’s property on Friday and picked a perfect location for the time being. Tyler’s gardener is also going to help us construct the shelter, which is a huge bonus. We are going to the Ferreteria in Nosara (hardware store) Monday morning to purchase all the necessary supplies.


One of Safari Surf’s surf instructors, Enrique, had 5 gallons of methanol left over from when Ryan was in Nosara three years ago! Ryan tested the methanol to make sure it was still in tact – we bought some cooking oil from the market and made a small test batch of biodiesel in a Fanta bottle so I could be more familiar with the whole process (its really easy!):
Tomorrow is a big day – we will purchase all the construction materials for the shelter and then we will break ground. Tonight is Karaoke night at the Casa Tucan, should be fun! Thanks for reading! Pura vida!
Jump to “Week 2.”